Why the world needs fathers

Fathers have always been deemed as important for children but what is the importance of good Fathers of faith for their children? What critical differences can they make?

When Fathers are Absent

Is there evidence that when a father is missing from a family that the children have greater difficulty at home? Absolutely! From some research, a study done by the Department of Health and Human Services in 1996, the results of which are astounding, we read what happens when the father is absent from the home. If you’re wanting to be a good father, consider how critical it is for you to be present in the home or if the father lives in the home, to be available. These facts are provided by the Department of Health and Human Services from 1996 and so these statistics may be even worse today. These were the last statistics available.

When a father is missing in the home or missing from a home, the home is at risk for life-changing, life-altering, life-shattering experiences that impact a child throughout their entire lifetime. Even more tragic is that these cycles repeat themselves when these children grow into adulthood and have children of their own. Maybe the reason they say history repeats itself is because we are not learning from it.

There is overwhelming evidence that when a Christian father attends worship service on a regular basis, the rest of the family follows.

There is overwhelming evidence that when a Christian father attends worship service on a regular basis, the rest of the family follows. A 2000 study found that when both fathers and mothers attended church regularly, about 41% of the children would go to church when they reach the adult stage. Amazingly, when the father attends church on an irregular basis, 60% of the children reaching adulthood will be irregular attendees or drop out altogether. When the father doesn’t even attend church, only 2% of children that grow into adulthood will attend church with nearly none of them ever becoming Christian. When this same equation is with the mother, the numbers are not nearly as drastic. The conclusion is that fathers have the greatest influence on their children’s lives and have the most impact on their becoming a Christian and attending church regularly as adults.

What this shows is that when the father takes the church and Christianity seriously, almost all of his children will too. When he doesn’t care about Jesus Christ, the Bible, or the church, then the overwhelming majority of his children won’t either. This shows you the critical importance of a godly father. This doesn’t only show you the importance of role modelling but of the father being the spiritual head of the family. His position is likened to that of the high priest in the Old Testament. As the priest lives and performs his duties and takes them seriously – without hypocrisy or duplicity – so too does the family. You simply can not fool children. A superb example of that is when Aaron’s son’s brought a “strange fire” before the Lord in the temple and took the performance of their priestly duties too casually (Lev 10). Aaron’s sons Nadab and Abihu were struck dead and the worship of the entire nation was negatively impacted.

The importance of children coming to saving faith in Jesus Christ can be broken down like this:

Yes! God is giving us fathers a serious warning here just like he tried to warn Aaron about his sons offering strange fire. I am not belittling the mother's impact of course but God has placed fathers in the position of having the greatest influence in their children’s spiritual lives and into adulthood. He will hold us responsible. We can actually bring a curse down on our family (so to speak) by our negligence and our absence. And as any sociologist will tell you, as the family goes, so goes society…and the nation. Now maybe God’s warning that He will “strike the land with a decree of utter destruction” makes more sense, for as the family goes…so goes the nation. 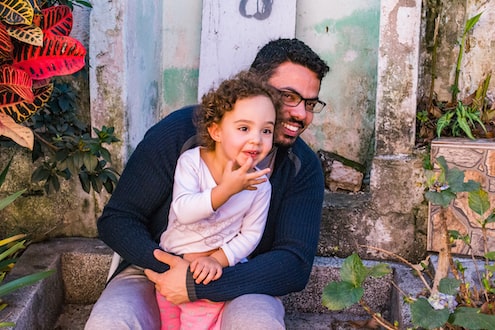